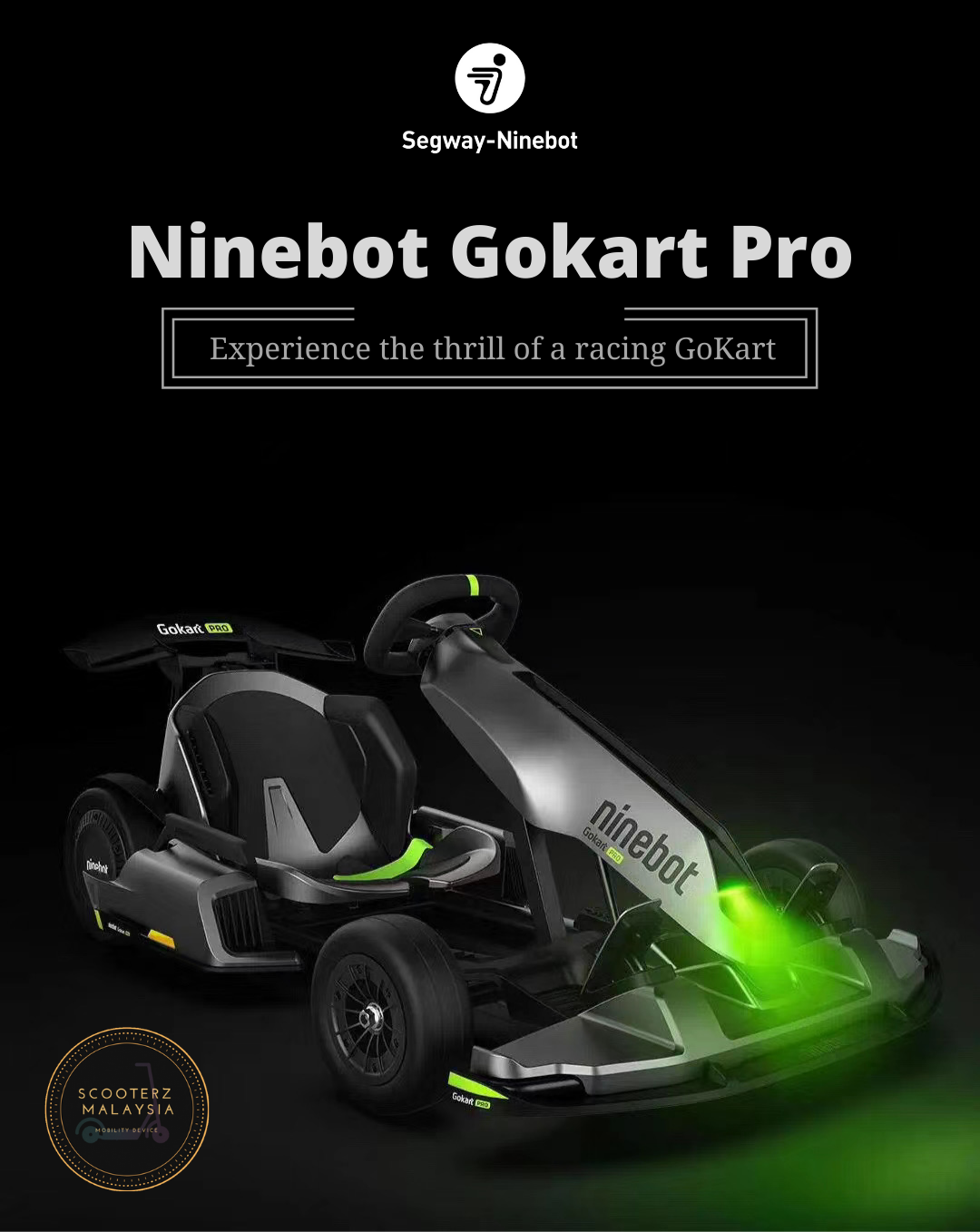 (40km/h and Comes with Dashboard)
⁣
Exclusively and Newly brought to you by scooterzmalaysia.com⁣

⁣The Segway Ninebot Gokart PRO is a completely overhauled GOKART with a much more powerful motor and highertop speed, which makes it an electric performance kart, with more than 150cc. It comes with 1.02g acceleration and 96nm of torque. ⁣

⁣
It has loudspeaker which features racecar Engine Sound Effect with, race car designed body kit, and a racing spoiler which gives you more grip on the ground.⁣ 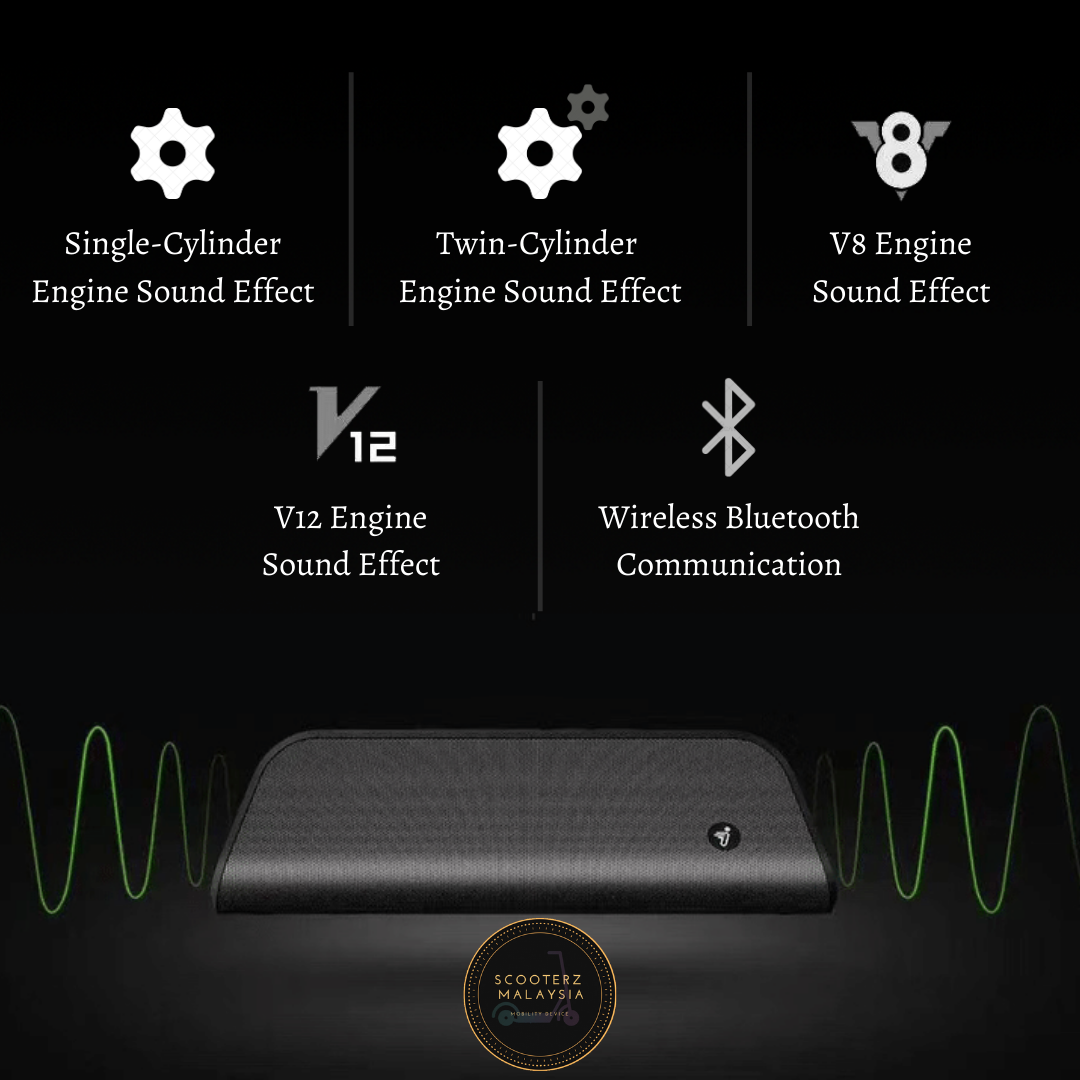 ⁣
It comes With 432wh battery and four air vents for the Battery Cooling system and allows it to round the 400m lap track for 62 laps.⁣ 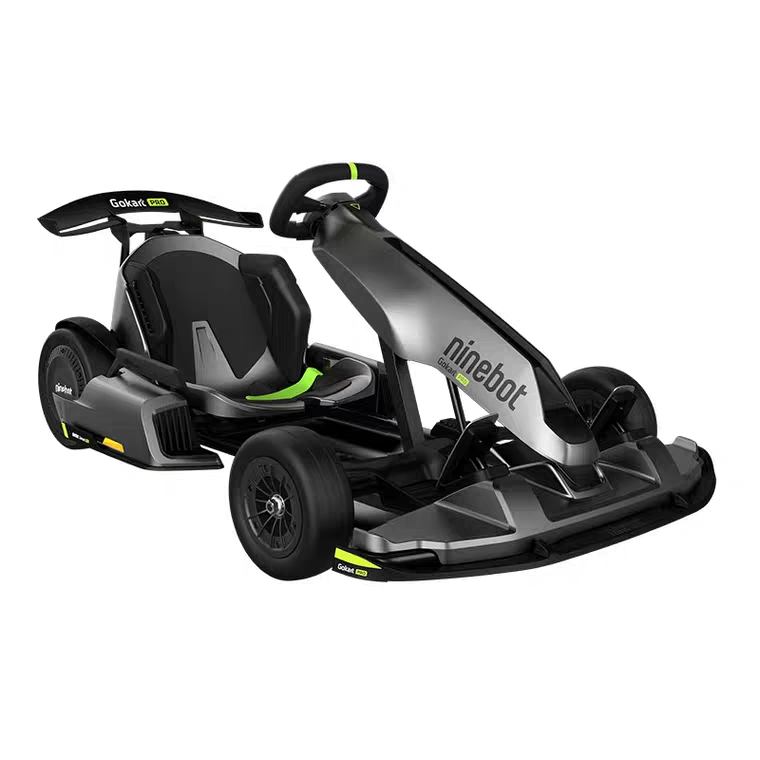 ⁣
The Segway Nimebot Gokart PRO has been Tested over 33000km together with professional race car driver, and designed together, and they are designed to bring you a much more pleasant drift mode.⁣ 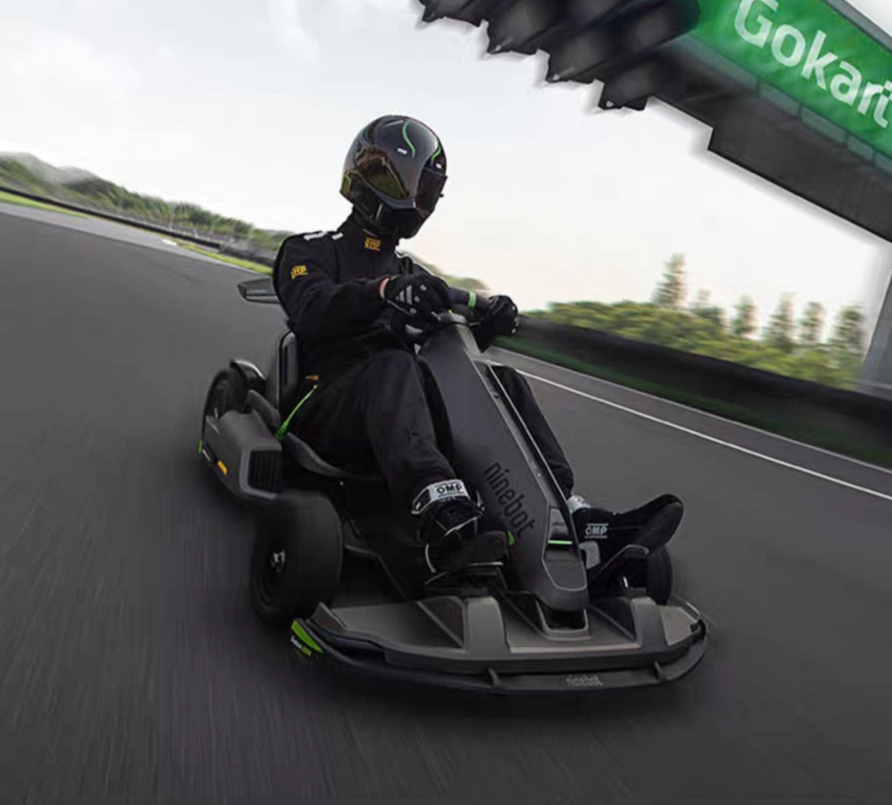 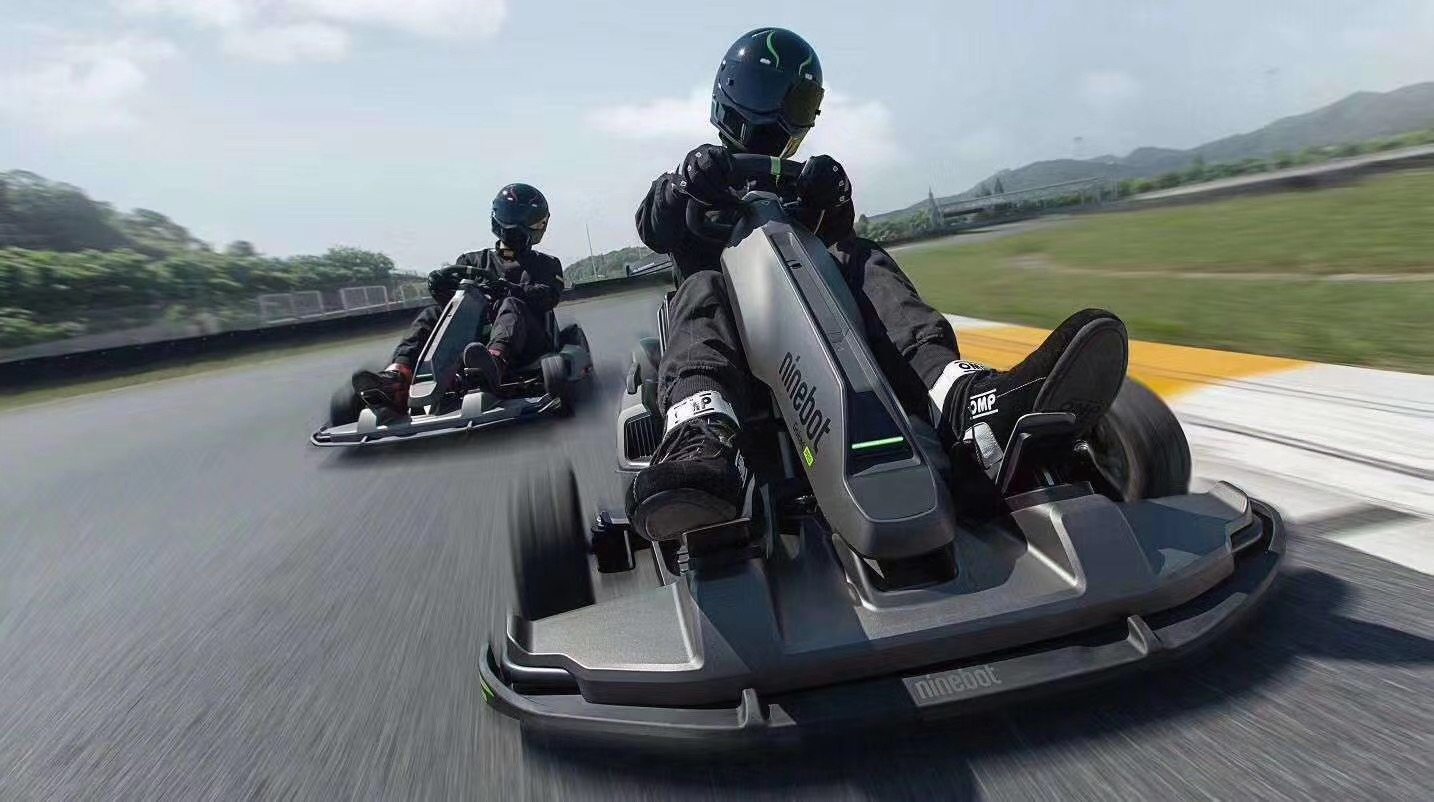 The gokart PRO uses quick dismantle tyre system which makes tyre changing easier if you're wearing out the tyres quickly from all the drifting and fun.⁣
⁣ 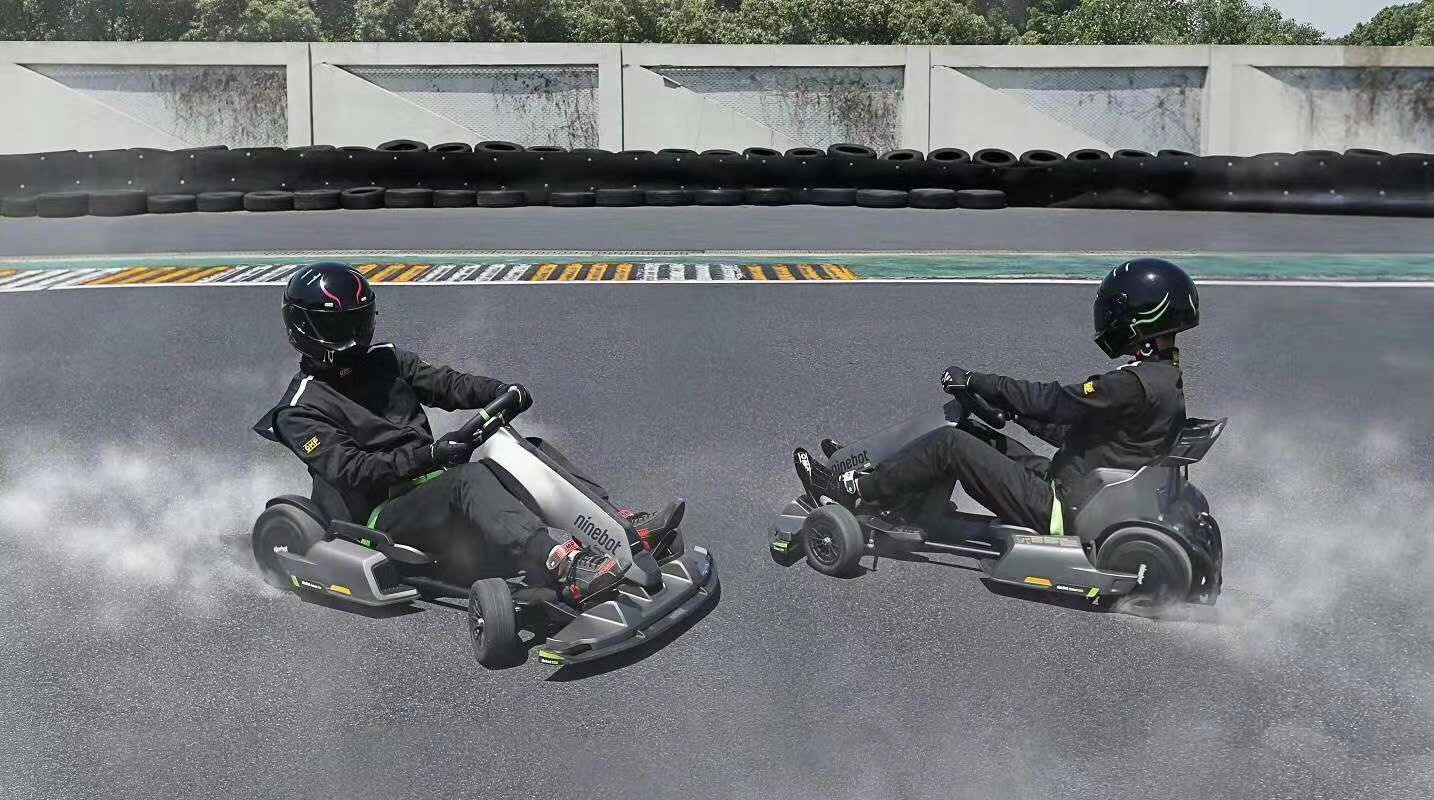 Added features includes auto hold, which prevents the kart to move on Gradient terrain.⁣
⁣
You can even set the torque vectoring in the app based on your preferred turning style and race style. ⁣ 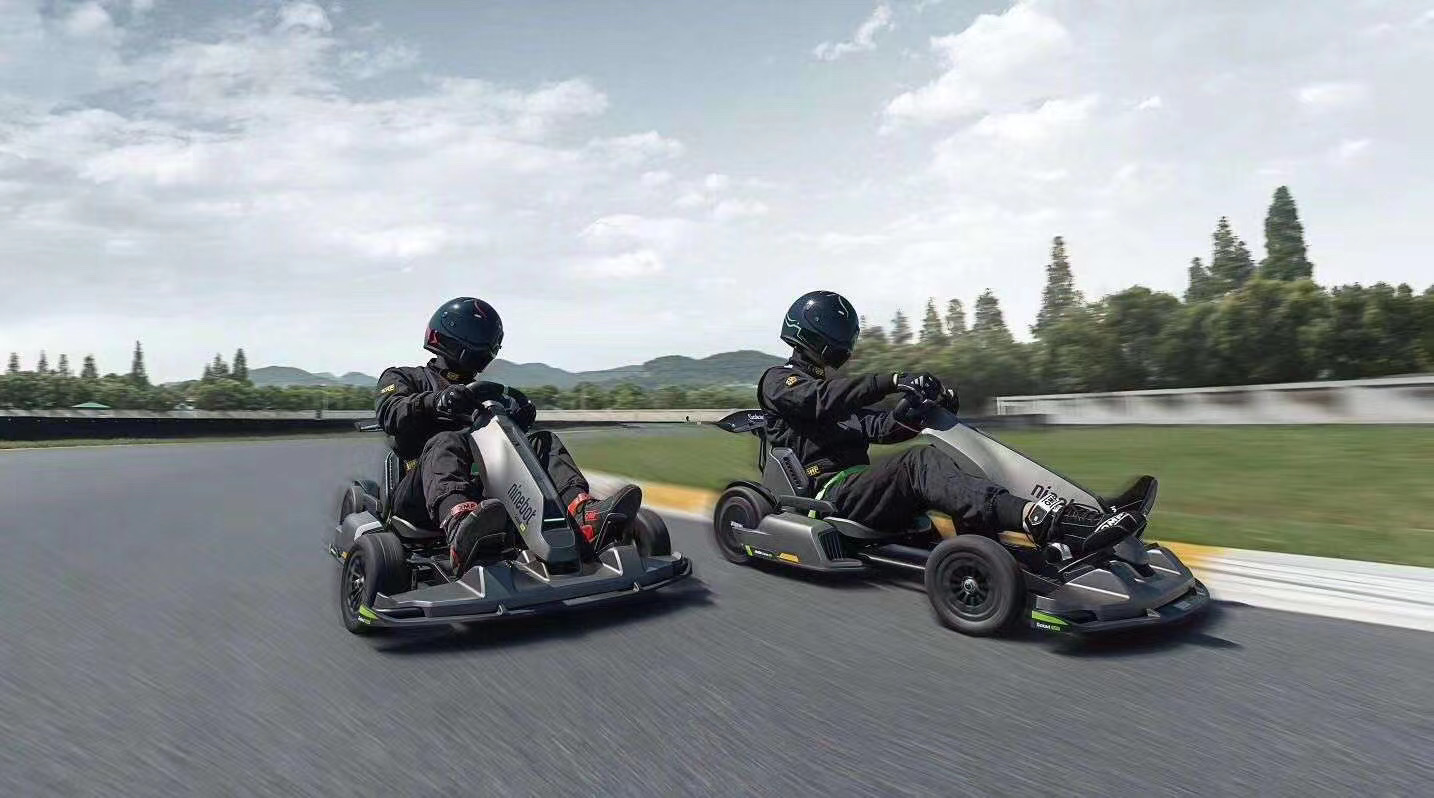 ⁣
Safety Features which includes reinforced front bumper, extra Grip front tyres to increase friction and high speed safety turning. ⁣
⁣
Safety features which also includes dual communication between the motor and gokart kit, with both cable and bluetooth communications. Which will reduce the risk of losing communication of the pedals and motor. ⁣ 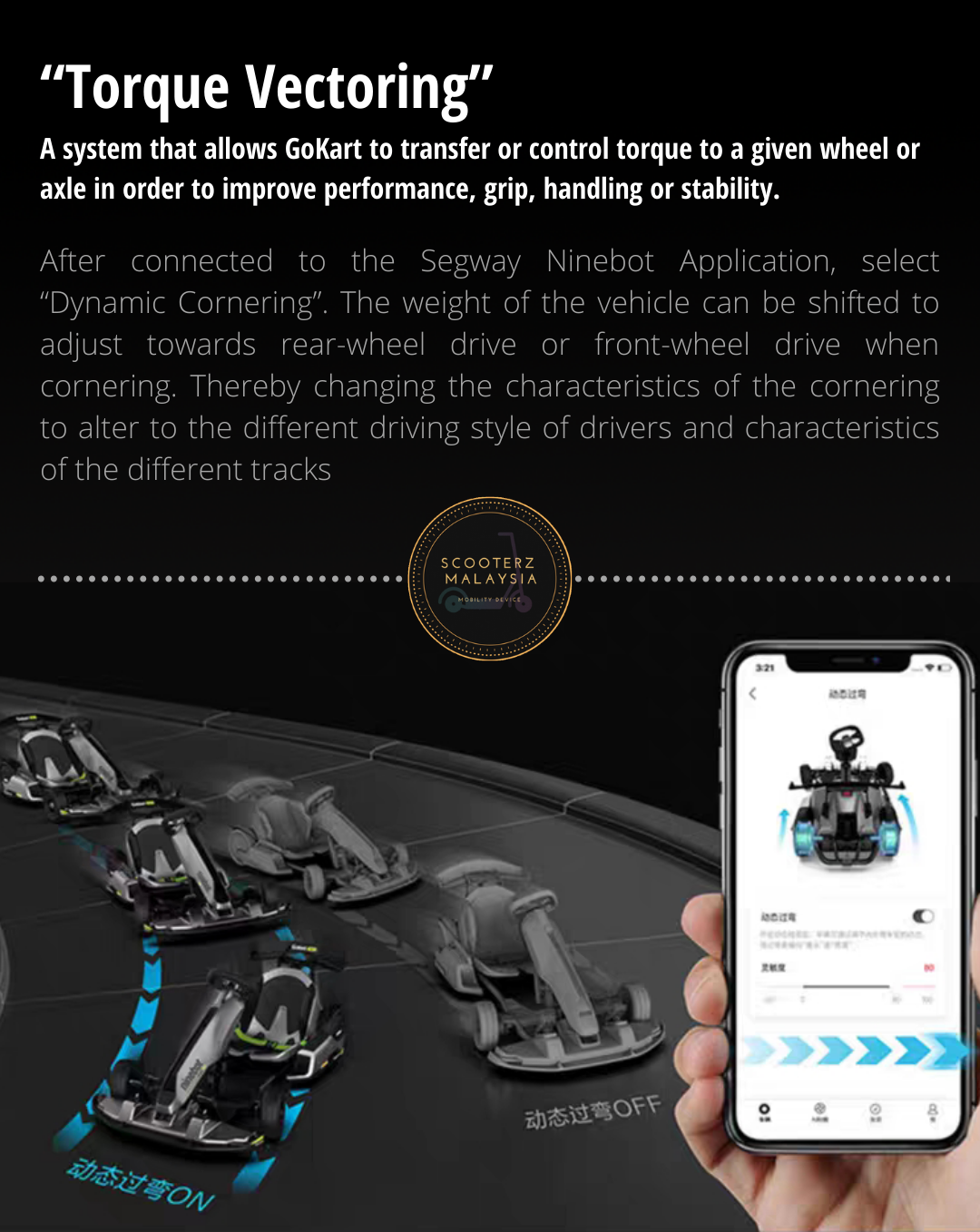 ⁣
It can be easily folded and placed inside the car. The gokart can be separated into two parts (gokart kit and Hoverboard Max), which you can use the hoverboard separately by assembling the leg handle bar. ⁣ 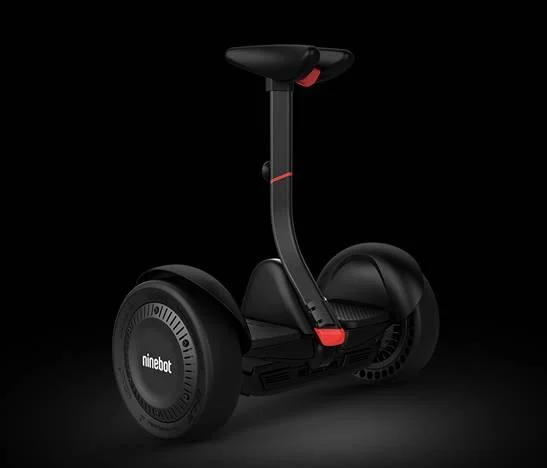 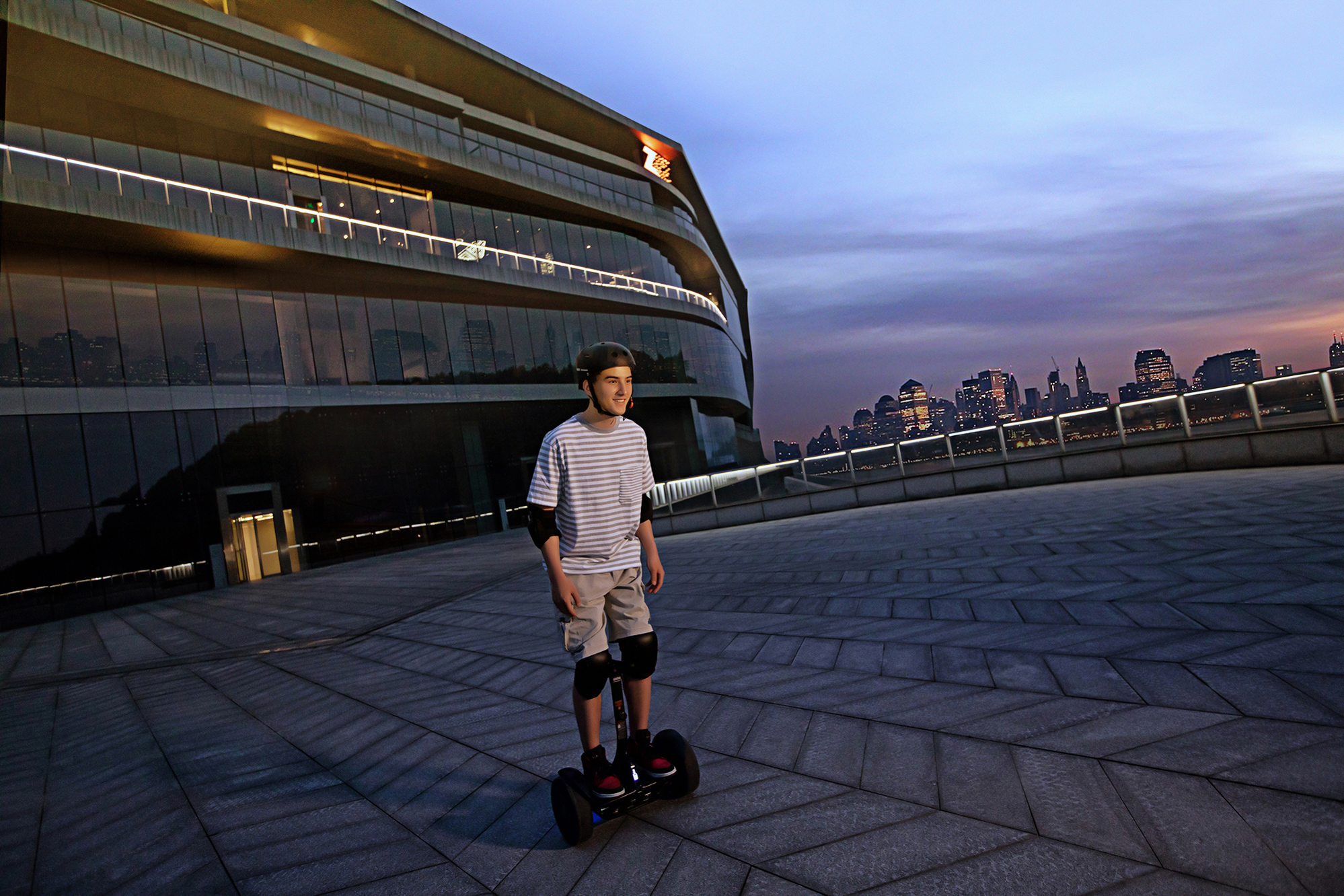 The Segway-Ninebot app allows you to pre-program your drifting experience depending on your own style or the site condition since the two wheel hub motors are connected separately to each rear tire. Therefore, the Drifting Assistant System can control two motors to provide different power outputs for each rear tire as it drifts, helping the driver to adjust the drifting dynamic in any circumstance. So you can drift like a pro in no time. Get ready to experience go-karting like never before with power oversteer drifting. The rear tires lose traction when turning, resulting in a faster speed cut-corner and dynamic drift. Suitable for both beginners and professionals.

Gokart PRO features a remarkable mechanical braking effect  take drifting to the next level. Lifting the handbrake while turning is another way to achieve drifting. Additionally, in the unlikely event that the electric brake fails, the handbrake can be used to stop the vehicle quickly. Don’t forget to release the handbrake otherwise, the Gokart PRO will stop instead of a smooth drift. The cutting-edge TPE rear tires bring users the most exciting drifting experience ever.

The controllable rear-end and high-speed cornering make it easier to show off drifting techniques like a professional racer. The Gokart PRO has an RR design; the rear engine and the rear-wheel-drive are set up like supercars. The weight distribution is designed with 40% front and 60% rear. The front end of the Gokart features three layers of TPE impact protection to increase the safety of the rider and the whole body is IP54 water-resistant.

Additional features such as TPE sides, aerodynamic rear wing, and metal pedals are included to up your Go-karting game. Triple Front Protection Inner layer: Steel frame can protect the body to maintain the shape. Middle layer: High polymer material can effectively absorb the energy from high collision impacts. Outer layer: TPE front lip can reduce the damage during a collision.

Four 8W high-power speakers on the Gokart PRO simulate engine sounds of single-cylinder, two-cylinder, V8, or V12 engines to create a more immersive Go karting experience. The speaker can also be used as a normal Bluetooth speaker to play the rider’s choice of music.

The Segway Ninebot app allows you to control four driving modes, adjust the drifting assistant level, control the light effect, and much more. Select the mode you prefer for safety or energy saving. You can turn on/off the Drifting Assistant System via the Segway Ninebot App. You can also set the drifting assistant level from the control panel after you turn it on, which can be moved from -20 to + 100.

●When the number is neutral, there is no power output difference between the inner rear wheel and outer rear wheel. (In this situation, it is recommended to turn off the vehicle.)

●When the number is negative, it is suitable for slippery site conditions. and reduces oversteer.

●When the number is positive, it is easier to perform drifting and it can boost the oversteer.

The Gokart PRO battery is a powerhouse, clocking in with a capacity of 432 Wh, featuring 4 air-ducts and 24km of range. With 15% hill grade ascent capability, it allows riders to climb the hills with ease.

Additionally, the automatic holding system can prevent slipping when the Gokart PRO is parked on a slope. Double tap on the brake pedal to switch into the reverse gear and to drive backward. The Gokart PRO is designed with an adjustable frame and steering wheel .

The Ninebot Gokart PRO is collapsible to fit into most vehicle trunks, allowing you to take it wherever you want to go. The Gokart PRO has a power unit that's from our newest Ninebot self-balancing transporter. Segway-Ninebot is a global leader in the field of intelligent short-distance transportation and service robots. 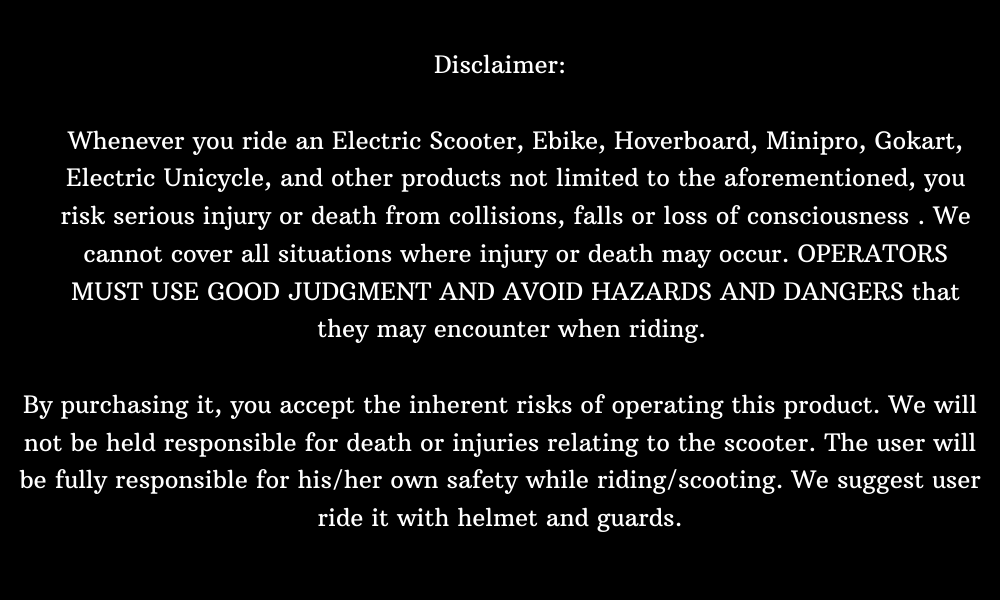